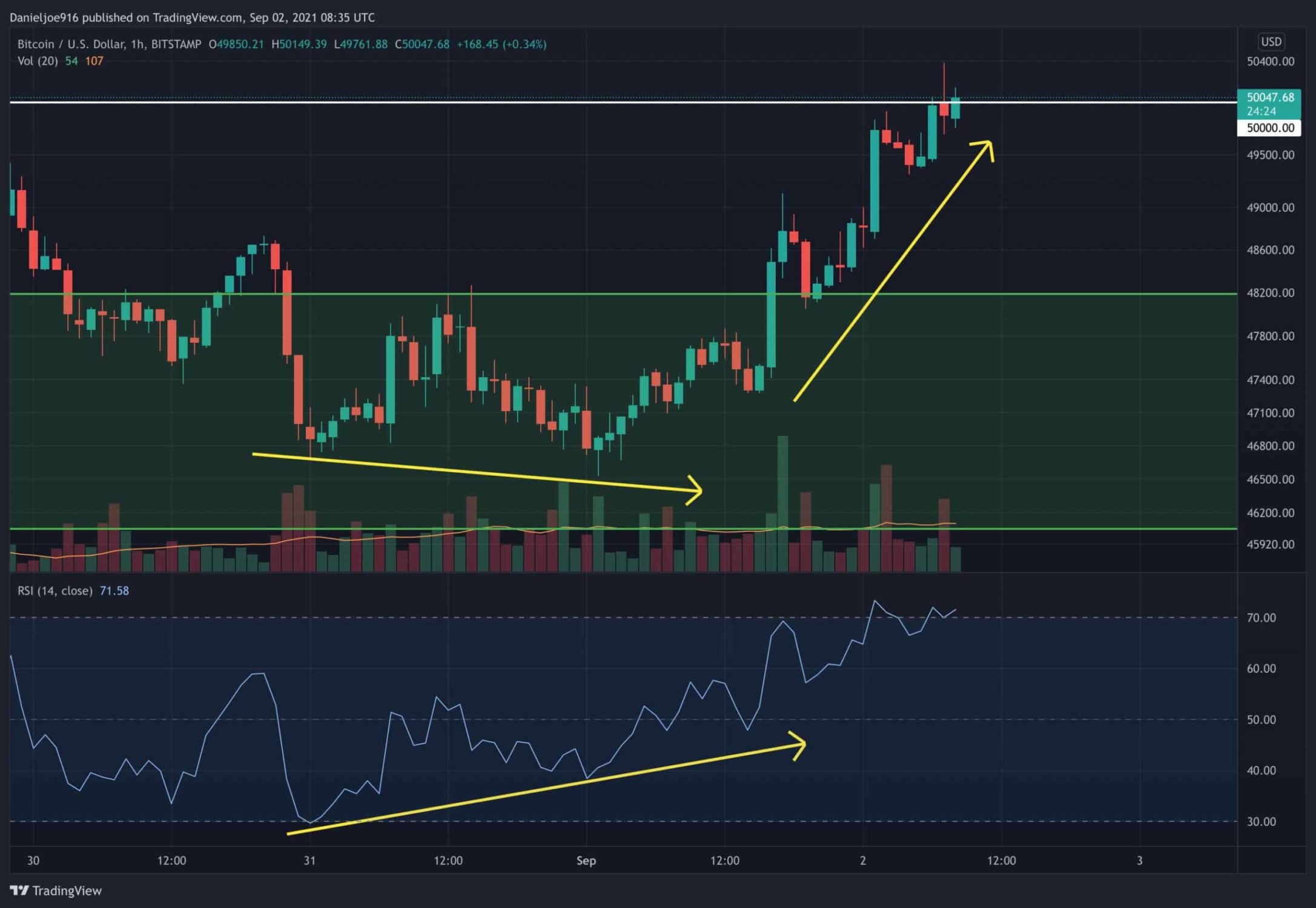 BTC starts the month of September up 7.9% from yesterday’s lows and with today’s attempt to retest $ 50,000 for a possible breakout.

The cryptocurrency appears to be completing its 10-day consolidation after falling on Jan.

Ahead of the current breakout attempt, BTC tested key support at the 21-day MA, 21-day EMA, and almost the 200-day moving average. The continued accumulation and declining cumulative spot volume helped the largest cryptocurrency hold the critical green zone of support between $ 48.1,000 and $ 46,000.

Yesterday’s daily close above $ 48,000 was a short-term bullish signal as BTC tested this level as resistance and support for almost 2 weeks.

As we reported yesterday, the hourly bullish divergence signaled potential local bottoming with an imminent reversal if technical data continues to confirm the divergence. The bulls managed to push BTC further up, adding further merit to it, leading to the current breakout attempt above $ 50,000.

The on-chain metrics continued to show a bullish accumulation as the foreign exchange spot reserves fell another leg to multi-year lows. Cash exchange net flows today saw a drop of 4,327 BTC – a strong signal of accumulation. The BTC miners’ reserves remain constant at 1.84 million BTC, with outflows to the exchanges (indicating the sale) remaining small.

Open interest in futures has continued to rise, with funding rates starting to rise. This signals that the market is starting to take long positions, but not significantly. It was impressive to see BTC rebound 72% from its July lows of $ 29,2,000, with borrowing rates still slightly above neutral. Overall, financing rates stayed roughly neutral to negative for months during the $ 30,000 to $ 40,000 consolidation, but trended upwards and are now above neutral.

With the current funding rate of 0.03%, this indicates that the market is not reaching excessive levels of long positioning. The funding rate rose to $ 64,000 earlier in the year, hovered between 0.10% and 0.15%, and stayed elevated for months, suggesting that the market was heavily long with increasing downside risk.

Wyckoff Accumulation, a technical multiphase and volume driven accumulation pattern known to be depleted of supply, is nearing completion of Phase D. This phase is known as the Consolidation Phase after price breaks out of a long trading range and shows signs of strength.

Bitcoin managed to hold short-term support at $ 46,000 for almost 2 weeks and is now trying to climb above $ 50,000 and $ 50,5,000, potentially completing Phase D and entering Phase E confirmed in which the price is entering a significant rally.

Nearly two weeks of consolidation with a slight pullback slowed 4-hour and daily momentum, but the 3-day and weekly charts remain bullish. It is important that BTC start rising above $ 50,000 this week and next week to further validate the biggest technical buy signal that flashed 3 weeks ago.

Overall, the strengthening of fundamentals, technicals, on-chain metrics and improving momentum are making the bulls more favorable. The bears struggled to push BTC below critical support at the 200-day moving average at $ 46,000, with shorts liquidating at $ 50,000 in today’s breakout attempt.

It remains to be seen whether BTC can successfully recapture the critical $ 50,000 level, but short-term technicals, improvement in momentum, and bullish on-chain metrics suggest a breakout is likely. If $ 50,000 is reclaimed, the bulls will have to push BTC above $ 50.5,000, $ 51.1,000 and the next major resistance zone between $ 55,000 and $ 58,000, where we have strong technical and Identify on-chain resistance. The cops have now regained control.

PrimeXBT Special Offer: Use this link to register and enter the POTATO50 code to get 50% free bonus on every deposit up to 1 BTC.